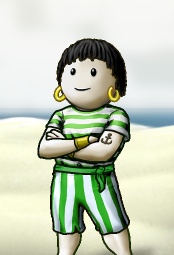 Pineaple is a pirate in the crew Polish War Fog.

Designed for Bilging and Sailing only, Pineaple had a difficult life on the Viridian Ocean. He looked for a crew and found some friends. So he found a crew Polish War Fog (after someone's help). Now Pineaple owns a bungalow on Dragon's Nest.

Pineaple likes spending his time on pillages and lazing in his bungalow (mostly lazing). But he's not so lazy in the ship. Also he likes cats (because they eat mice and mice eat pineapples).