Pillaging Fools is a crew that sails the Meridian Ocean. The crew currently flies the flag of Tsunami.

Pillaging Fools was originally founded on 15 February, 2007 by Tomasco after he had spent many months in the crew Soul Collectors. He had decided it was time to tackle a new challenge and found a crew. He was joined in this endeavor by a few members of Soul Collectors, including his first mate Icekubes.

As time when on, Tomasco became increasingly disenchanted with being monarch of Soul Mates, because of the political aspects of the game and his ever increasing real life workload. Stepping down at first seemed an option, but, knowing his own nature too well, he decided if any fun could still be had in the game, he had to step aside completely.

The crew, naturally shocked, continued on under the leadership of Icekubes. A few months later the crew decided to merge into Trouble, strengthening both in the process.

In the autumn of 2009 Tomasco was once again getting the urge to captain a crew. In late January of 2010, with his workload about to greatly decrease, Tomasco once again formed the Pillaging Fools.

After flag jumping around for a bit to visit with some friends, Tomasco returned the Pillaging Fools back to their original home in Soul Mates.

In late May of 2016, Tomasco and Larkstar once again felt the call of the sea, and returned to Pillaging like Fools. They found only a few Fools, bravely holding on, with Soul Mates now a ghost of it's former self. After a few weeks of pillaging, many times with help from their old friends Kcoolaid and Ahoymatey they made the tough decision to pull Pillaging Fools from Soul Mates and join their friends in Tsunami.

The waves surge and swell all around your boat. Mist flies through the air and foam coats the decks. In these conditions your eyes, ears and mind can play tricks on you. Clouds become land. Flotsam becomes ships. Up and down trade places. Then you hear the sound you thought you would never hear again. That hideous, devil-take-your-soul laughter. You shake your head to try to clear it, but it only gets louder. And shriller. And closer. It's the laughter that comes from a boat full of fools. Pillaging Fools!

That's right, we're back. For how long no one can say. Where we port our ships only we know. (Usually when and where we run out of stock) What flag we fly besides our skull face jester is ours to decide. What I can tell you for sure is that we will be once again pillaging like Fools. Just because it says Pillaging does not mean we don't like things like Atlantis, Cursed Isles, Flotillas, Blockades, and general carousing. It does mean however that you really won't find us dock tarting or hanging about the Lima Inn. It also means you find us pillaging every single day. 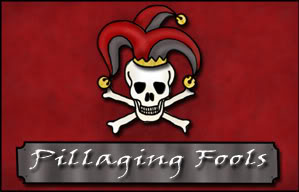