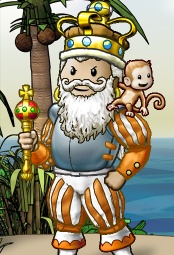 Pattonditto is a pirate on the Cobalt Ocean, many hate him because of his skills. He is the captain of the crew Florida Gators.

Pattonditto began his time in Puzzle Pirates on July 2005 on Dragon's Nest where he created the Channel Four News Team along with fellow senior officer's Pikatina and Ronburgundy. After playing for a few months he took a break from the game to concentrate on school, but would return in April 2006 and has played ever since. Once he returned the Channel Four News Team joined the flag The Art of War but then decided to join Hurricane for a few weeks. His crew then returned to The Art of War where it merged with the crew Serial Pillagers. In May 2006, Pattonditto took over as the governor of Tigerleaf Mountain after Quintalis retired until he turned governorship over to Ohfroggyone. He is now the captain of the Florida Gators and a prince of the flag Pika Patt n Burgundy Inc. Now he plays poker and runs his hemp trade while trying to remain undetected by the OM's

He has collected his trinkets and combined them with Pikatina and Ronburgundy to be displayed at the Tigerleaf Mountain Inn The Swamp and other various shops owned by Pika, Patt, & Burgundy Inc.