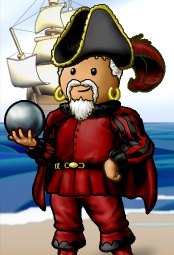 Quintalis first appeared on the shores of Azure, shortly after beta opened in July 2003. He was one of the founding members of the successful crew Serial Pillagers. Quintalis is most famous for his Distilling Video. One of the few remaining Old Salts in the ocean, he has captained the Serial Pillagers to the top of the fame list in Cobalt, and gained control of Tigerleaf Mountain. Quintalis was the first governor in Cobalt, via Prolix Purlieu, and the first governor of 2 islands.

Quintalis has presented his official resignation in early December (2006), after puzzling for over 3 years turning all the power to Devjoe. He has left a legacy behind that will not be forgotten. Some of his students are now Captains of their own crews on Cobalt or monarchs of their flags.