Sea Monsters are the most dangerous and mysterious foes a crew can face in Puzzle Pirates. For a start, every Sea Monster engagement is sinking. But worse still, the foes you will face in a Sea Monster lair may also be tempted to steal your ship from time to time. So beware!

Unlike the Brigand Kings, whose forces ply the waves on ships like mortal men, Sea Monsters can (and will) take countless abominable forms. You never know what you might encounter! Sea Monstering is only for the brave. Pirates require a bravery badge before they can set sail for any Sea Monster Lair.

In addition to their vast accumulated booty, a special color is reserved for each Sea Monster Lair. Successful pirates can return from their adventuring with unique items and clothes that will provide clear evidence of their bravery.

Indeed, the rewards from sailing into the uncharted waters of a Sea Monster lair are great. Those pirates brave enough to face the unknown can return with extraordinary treasures and stories to match.

In Atlantis, pirates can haul up treasure from sunken ships. The challenge in Atlantis is to successfully haul treasure while avoiding sinking. The seas are full of scary beasties!

When voyaging to the Cursed Isles, pirates can dig up buried treasure if they are skilled enough to repel the deranged cultists and half-dead inhabitants.

Traveling in the Haunted Seas, pirates can haul up treasure from richly-laden ship graveyards if they can defeat their ghostly guardians.

While venturing the Kraken, pirates who dare navigate the board can pick up pick up chests, eggs, and ink if they can manage to take them to the safe zone.

In any case, treasure chests contain the more interesting prizes to be won in the Sea Monster Lairs. Half the battle be getting them out and back to the safety of yer Island home. 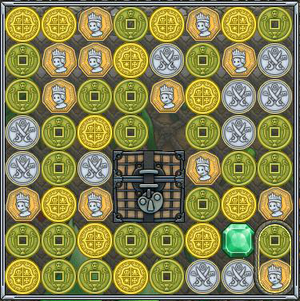 Chests are stored in the vessel's booty and can only be opened upon reaching port. Their contents will be awarded to the whole ship through the booty distribution to the vessel's owner, or to individual pirates at random or in recognition of their performance during the Sea Monster voyage.

The chests come in three varieties from the most common Chest to the less common Locker, to the rarest Treasure Box. Rarer chests will contain more valuable rewards. Reports indicate that the rarest chests are more likely to be found guarded by the most ferocious monsters.

The chests found on the Cursed Isles are somewhat different:

The chests found in Haunted Seas:

Treasure reclaimed from the Kraken lairs:

These chests are highly prized by the pirates roaming the high seas and are pillaged at twice the normal rate by attacking players and brigands.

Sea Monster maps are the only way that a crew can gain access to a Sea Monster lair. These maps can be won in pillaging battles or, more rarely, in combat with skellies. The maps mark a route between an island and a unique league point, which are similar to flotilla league point markers.

Sea Monster maps can be used for a limited time before they expire, normally eight days. Prior to their expiration, the map owner can use the map to chart to the hidden location identified on the map.

While a course is charted to a Sea Monster lair, the vessel can have its voyage configured for "Sea Monster Hunting". This causes any jobs posted to the notice board to reflect the intent of the voyage.

All crew on a Sea Monster voyage must carry a badge as proof of their bravery or be a subscriber if sailing on a subscription ocean.

A ship will be unable to set sail for the uncharted waters of a Sea Monster lair if crew members do not have a Bravery Badge or subscription. To set off on such a quest without a brave crew would surely lead to mutiny.

The bravery badge can be purchased through the Palace Shoppe like any normal badge. 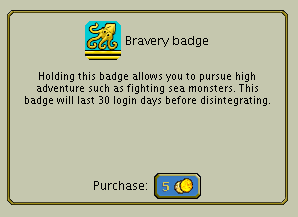 When a ship reaches an Atlantean Outpost, the vessel will enter a Sea Battle board with the following special features:

Player vessels enter the Sea Battle board from the side. Placement will be based on the relative strength of the vessel. Stronger ships will be placed deeper into the Sea Battle board where more challenging monsters lurk. A vessel will start in an entrance zone to the top-right or bottom-left of the board. 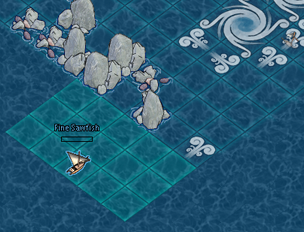 In the Cursed Isles

In the Haunted Seas

When breaching the Haunted Seas, vessels will start in an entrance zone in the top-right or bottom-left of the board, with their exact placement along the board being based on the strength of the ship. Stronger ships will be placed deeper into the Sea Battle board, where larger ghost ships and greater treasures can be found.

Upon entering a Kraken lair, each pirate on the ship will be placed on their own individual rowboats to navigate. Battle navigation works as it usually does, but the turn timer runs slightly faster, and rowboats receive a steady supply of free move tokens. Various treasures can be found scattered about the Kraken board. Pirates can pick up pick up chests, eggs, and ink by navigating their rowboats over these treasure spots. Once a treasure has been picked up, the pilot needs to return to the safe zone in order to load the treasure into the parent vessel's booty in order to keep it.

Like a flotilla location, a Sea Monster lair can be accessed by more than one ship at a time, making coordinated forays into a lair possible. However, a crew should also be wary of other players looking for blood, so keep your eyes open while out on your adventure! You never know if another ship will be friend or foe. Unlike Flotillas, vessels within Sea Monster lairs do not have any protection from the shots of other player vessels.

Escaping from the Sea Monster Lair

When a crew has gathered all the booty they can carry, or their ship has been damaged as much as they're willing to risk, they can safely leave a Sea Monster lair by returning to their entrance point. If they can reach it before the Monsters reach them, that is.

The first Sea Monster Lair discovered was that of the Atlanteans. While little has been discovered about these ocean-dwelling folk, pirate crews have been sailing across their borders for some time now in search of treasure and adventure. These Atlantean Outposts are surely only the bare frontier of their mysterious civilization. 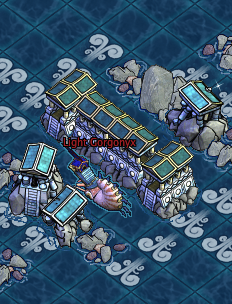 The Cursed Isles are home to the once great captain, Vargas, who succumbed to the dark forces that infest these islands to become the Brigand King Vargas the Mad. Avast! Only the bravest of pirates should dare pierce his veil of chaos! 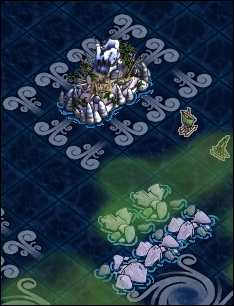 Haunted Seas is the the ghostly stronghold of the ethereal Brigand King Barnabas the Pale. Great treasures are said to reside at the bottom of those eerie waters, but Barnabas and his phantasmal minions do not intend to let them go without a fight! 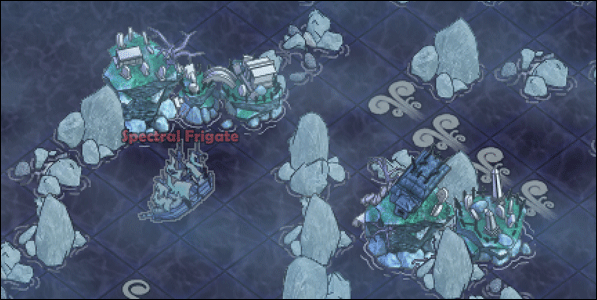 The most recently discovered Sea Monster Lair is the Kraken. Rumor has it that it hides untold riches and great dangers. Beware the Kraken's tentacles that prowl the board and seek to demolish yer rowboat. Not for the faint of heart! 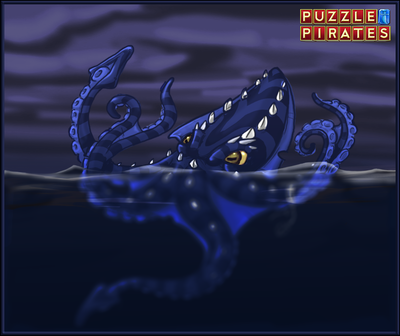