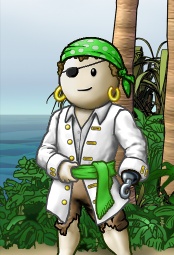 Dartwith is a pirate on the Midnight Ocean.

A lone sloop sliced the oil-black waters on a clear, dark night, carrying a bedraggled crew of pirates swiftly towards port where a hard-earned morning of revelry and relaxation at the inn beckoned. Peppered by the peaceful splashing of the waves and the groan of the ship's riggings, the comforting silence was abruptly shattered by a low-frequency rumbling the crew more felt in their bones than heard. An enormous geyser of foul-smelling water exploded through the glassy surface, and as it tumbled back whence it came, revealed a monstrous figure looming before them, silhouetted against the dinner-plate moon.

"Kracken!!" arose the anguished cry; even if chaos had not erupted among the crew, evasion of the creature was impossible for even the most skilled of captains. The tiny sloop was beset. All seemed lost.

That night a hero was born. A young greenie was on his first voyage ever aboard that vessel that fateful night; he displayed such quick-wittedness, courage, and fortitude that those who witnessed it knew he was destined for great things, and felt themselves fortunate to have met this exceptional man at the start of his illustrious pirate career.

Dartwith wasn't there, though. He was standing on the Alpha dock tarting it up.