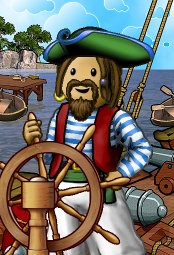 One fine day Mullins spawned on Jorvik Island. He joined a crew he doesn't remember on one of his first journeys, then left it again quickly, as it seemed silly. After that, he stayed independent for a while, looking at crews, before finally committing to membership in the fine crew Barnacle for Brains, where he spent a good portion of his pirate career. While there, he served as a senior officer in that crew and king of the flag Incredible. Upon the break-up of Incredible, Mullins felt it was time to explore new options on the Midnight Ocean and left Barnacle for Brains. After much soul searching, and a stop off to eat a Ham on Rye, Mullins found a home in Blighted. He settled in with Mogget and her crew, Vitamin Sea, where he could be the forum tart he is in a flag that truly epitomizes the meaning of that title.

Mullins is married in-game to the lovely Eradicat, with whom he shares a townhouse on Wrasse Island. Since Blighted blockaded Gaea Island, he has had a peg leg. He has a pet rat, Smee, and stopped collecting ships that have Sawfish in the name.