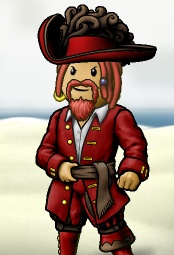 Mudbeard is a pirate on the Midnight Ocean. He is currently a senior officer of the crew Insurgent Seadevils and a member of the flag Midnight Marauders.

Mudbeard started his pirating career on August 7th 2005 on the Cobalt Ocean with the home of Dragon's Nest under the name Devilreno. He quickly became friends with Erikerikson and Jeepgirl and spent most of his time at their Shipbuilding stall. Being a greenie, Mudbeard soon got bored of the game and took a long break, only to come back and find that his pirate had been deleted.

He then created his current pirate on the Midnight Ocean. He jobbed around with a few crews over a few days and finally joined the Drackonic Exiles as a full time member. There he became friends with Celach, Eross, Conal, and Tunahelper. Shortly after joining he subscribed and became a pirate. After a month of hard work Mudbeard was promoted to an officer in the crew. Soon some of the senior officers and the captain, Ironbeardz, had some disagreements and most of the pirates Mudbeard knew left the crew.

Eventually Mudbeard left Drackonic Exiles with Tunahelper and they started their own crew, Dolphin Safe, and flag, Muddy Waters. Again he got bored of the game and went on a 6 month break. When he came back, he left his crew and went to join the crew Death or Glory under the flag Midnight Marauders with Celach and Eross. There he became friends with Valient and Scabb. After a few months, many members of Death or Glory left, including Eross, Celach and Mudbeard. They went to join Wolf's Dragoons under the flag Morgan's Marauders where Mudbeard rose through the ranks up to fleet officer. Over the next few months Mudbeard pillaged with the crew and helped them take Delta Island. Shortly after Delta had been taken Mudbeard took yet another break to play World Of Warcraft with some real life friends.

When Mudbeard came back to the game he was convinced by Celach to leave Wolf's Dragoons and come join her crew Insurgent Seadevils under his old flag Midnight Marauders. When he joined he was immediately promoted to the senior officer rank, and that is where he resides to this day. He is usually hanging out at his house or foraging on a ship.