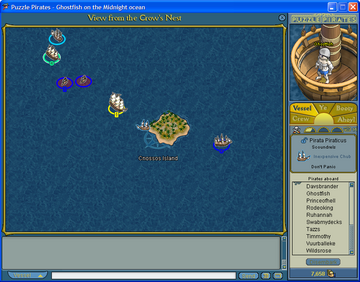 Might rings as seen from the crow's nest and a bar depicting the range of colors/difficulty.

Every ship on the seas has a strength rating known as "might." Might is shown by a small ring around each ship: the might ring. The might ring serves as an indicator of the strength of an enemy ship relative to one's own ship. Icons also denote rumbling (small circle) barbarians and swordfighting (small rectangle) brigands.

Attacking ships of different might ring colors can have various consequences. If a ship engages an enemy with a blue might ring, it risks being engaged by the black ship.

Might rings are commonly used by the commanding officer of a ship to determine what brigands to attack. Generally, a green-ringed enemy has the best possibility of being a winnable fight while still giving a large amount of booty. Ships with easier might rings may bring easier fights, but they will often bring in less booty, and attacking stronger might rings can often lead to losses.