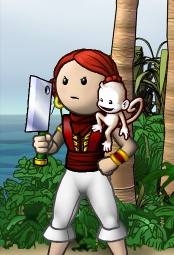 Lovelytini is a senior officer of the crew Black Death, and a member of the flag Bathrobe Army.

Lovelytini has been a pirate on the ocean of midnight since mid-December 2003. She drifted a bit between crews before quickly settling under Cioj in his crew Fifth Fist of th'Misfits. The Misfits were an independent crew at the time, soliciting bids from flags. The crew decided that the best choice for them would be to join in creating the new flag of Tyr's Own along with other like-minded crews. Lovelytini remained a member of The Fifth until July 2004, when she left to create a solo crew Stolz which still sailed under Tyr's. Stolz was Tini's home for well over a year, until most recently she left Tyr's (in name only as she will remain loyal to them until her death) for Black Death.

Lovelytini has a trinket-collecting problem, which is mostly fueled by her extensive starfish collection: