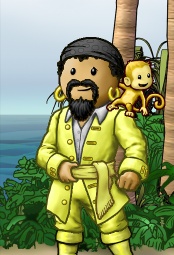 Cahrin, though now dormant, is a fleet officer in White Wynds, flying the flag of Crimson Tide. A long-time member of that flag, he puts into port where they call home, Xi Island.

Cahrin is an avid puzzler. Although perhaps best-known for his swordfighting, he has multiple ultimate rankings and is paragon or illustrious in four different puzzles. In July, 2004, he won a yellow monkey (called Bananas) in the 8th BlackDeath Sword Tournament! on Midnight. That same year, he was on the winning Olympic Champions League sea battle team.

At one time, he managed a distillery on Turtle Island, named Tipsy McStagger's. He negotiated its sale in April, 2005, and by May had opened up a tailoring stall on the same island.