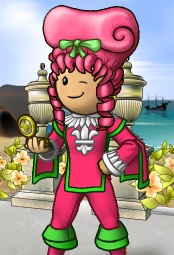 Linh and her alt, Riceball were created on the Midnight and Cobalt Oceans respectively.

Linh is currently in the crew Midnight Serenade and part of the flag Midnight Yacht Club. She is in her 15th year of YPP.

She first started YPP on May 11, 2005 on the Midnight Ocean. Her friend was the first to introduce it to her. As a greenie she joined The Nameless Corsairs and member of the Looterati flag. At the time, greenie could only play for a trial of a week and so when the week ended, she subscribed even though she wasn't sure if she liked the game or not. Surely enough, she loved the game and stayed as a subscriber. As her skills of the pirate games increased, she bought her first ship. Soon after that, she left the Nameless to join a friend's just started crew as an officer. She lost her first ship right after joining her friend's crew in a Swordfight game. That didn't stop her. She got another ship in place of her missing ship, Ambitious Carp.

Her friend disbanded his crew and she was left crewless until her friend Eartha, who introduced her to the game, made a crew of her own. For a few months she was in that crew and opened an ironworking stall for a month. That stall was open until it went broke. Her friend disbanded her crew and Linh made a crew of her own. She found out it was very lonely in a crew by herself, and she then joined Loyalty Haven as a senior officer and became a lady of the flag BIG WIGS, which was a dream come true. While in that crew she also bought another ship, which was the new dhow named Cheap Flounder. She bought it from someone so it was already painted, aqua and gray, at a cheap price.

Sadly, after her long hiatus from the game, she came back to find that most of her crew member became dormant. After a hard decision that she sometimes regret, she left the crew. On July 5, 2010 she joined the crew Hunters' Moon of the flag Dies Irae after their successful pilly. Being a non-subscriber right now, she is a cabin person and learning all the new games YPP added while she was gone. Again....Linh went on hiatus for another year and came back to a dormant crew. She left Hunter's Moon and joined Midnight Serenade of the flag Midnight Yacht Club on Friday May 13, 2011. Since she had been gone for a year, things have drastically changed and it will take her a while to catch up, just like last time.

On April 2, 2017, Linh makes a return (once again) to a whole new combined ocean Cerulean. Thankfully her crew on Midnight is still here even after a 5-6 years hiatus. Although the lack of pirates on the ocean is making it hard to make a decent living, all the puzzles are still as fun as she remembered.

Back and forth with the hiatus, the year is now 2020. Linh has moved to Emerald to play full time there but occasionally stops by Cerulean to check in.

Pirates can find Linh on the Alpha's Dock doing nothing or on the Cobalt Ocean as Riceball. You can mostly find her on Emerald as Cinnamon

Riceball is a fleet officer in the crew Serve no Porpoise and a member of the flag Forever Untamed. She started the game on May 11, 2005. Even though she is very busy outside of the game, she will alway find time during the summer to go back to YPP. Riceball can also be considered the alter ego of Linh.

After a year of Midnight, Riceball decided to try out the Cobalt Ocean. She started out as a pirate in the crew Obsidian Light and member of the flag Keepers of the Light around October 2005 with her friend. She left the crew at the end of that year.

Starting in the summer of 2006, a pirate met her at the Lima docks and ask if she wanted to join Seventh Cavelry part of the flag HMINF. She did and started out as an officer in that crew. Now the crew name is Highland Cavelry and part of the flag Vertigo. Riceball is now a senior officer and loving her crew.

She did however leave her crew for whatever reason that she cannot remember and is now a fleet officer in the crew Serve no Porpoise and member of the flag Forever Untamed.

Pirates can find Riceball on the Dragon's Nest Dock or trying to win at poker in the inn, or on the Midnight Ocean as Linh.

Cinnamon is a senior officer in the crew Cenreist and a lady of the flag Iter Vitae. She started the game on May 3rd, 2006.

Leaving Cerulean behind, Cinnamon decided to come back to the game in April of 2017. Bouncing between different crews she stumbled upon Cenreist of the flag Per Aspera Ad Sol. For three months she played everyday to start over again on a new ocean. With her new crew and new start on Emerald, she learned how to KH, how to gamble, and how to blockade. On July 2017, her flag successfully blockaded and won Anegada Island, which she became governor. She found her love for the game again but was soon burnt out from it and stepped away.

On June 6, 2020, Cinnamon came back to game to casually play. Pirates can catch her on the weekend bilging in a blockade or attempting to memmed the entire ocean