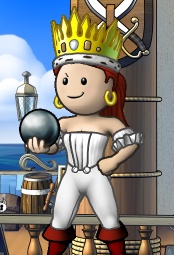 Lilredhen is captain of Chaos Theory and is a princess as well as secretary of commerce of the flag Dies Irae on the Midnight Ocean.

Lilredhen is currently the captain of the crew Chaos Theory which was founded January 25, 2005.

Lilredhen can be found dock tarting just about anywhere, or managing her various shops and stalls around the ocean.

Lilredhen first joined the world of Puzzle Pirates in June 2004; her first crew was Midnight Raiders. She stayed there for a short time and moved to Emerald Valkyries. She bought her first ship the Credible Flounder by working hard and finding creative ways to get to and from Endurance Island once it was colonized.

When her best mate Xppibro decided it was time to move on and start his own crew she followed and joined him in Chaos Theory. Then she became princess of the flag M A D. After the Jorvik IX blockade, Chaos Theory left M A D and she became a princess, and later queen, in the flag The Big Kahuna. As a non-political flag, its members could play the game however they chose, with whomever they chose, and not be limited by political obligations.

When Xppibro decided it was time to move on and try other things in the game, he left her the captainship of Chaos. She then had a brief adventure with the flag Hope, founded by Radders. Then, after much soul-searching she again left and the crew was independent for a brief time. After losing a leg in the defense of Turtle Island