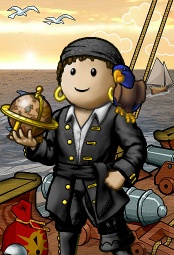 Xppibro is a pirate on all main subscriber and doubloon oceans but he mostly plays on the Midnight Ocean. He created the crew Chaos Theory, which was number one in fame for months while he was captain. He also created the flag M A D and led it in partnership with Scallywag Syndicate at the controversial Jorvik IX blockade, part of the larger Scallywag War.

Because the Jorvik IX blockade became a political issue that very strongly divided the ocean, Xppibro left Chaos Theory during M A D's brief war with Looterati. He resumed leadership of Chaos Theory when the crew left M A D. He later created The Big Kahuna as a non-political flag so its members could play the game however they chose, with whomever they chose, and not be limited by political obligations.

Eventually Xppibro moved on to try new things and meet new people. Since leaving The Big Kahuna he has been in the crews of Bellacos Banditos, Hell For Hire, Skull Hunters and currently Phoenix Warriors of Tyr's Own. Being in crews from all sides of the "Mega Allinces" has been rewarding in getting to know the people behind the flags rather than seeing the flag as a political entity only.