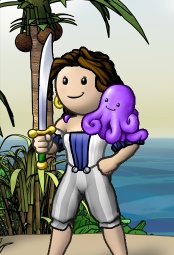 Lidrasha - nicknamed Liddy - is SO and First Mate in John's Corsairs of Water Sleeps, owners of Beta Island on Midnight. She Manages Johncorsair's Ironworking Stall on Beta Island.

Lidrasha is best known for her literary skills, her sense of humor (often adult), and her ability to rock the sparkly in sails and carp. Lidrasha and Johncorsair both regularly participated in Eris' Piratey Poetry Corner, frequently winning prizes for their efforts.

In honor of their real life wedding annieversary, Lidrasha and Johncorsair were married in game on Tuesday May 10, 2005. The ceremony was officiated by Lordkalvan.