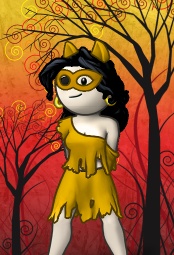 Lanya is a pirate who plays on the Emerald Ocean .

Lanya began her pirating career on the Viridian ocean in 2005. She sailed with the crew Imperial Clan rising to the rank of a Senior Officer.

Lanya would eventually leave Imperial Clan to start her own crew with the help of two other SO from her former crew, Pistachio and Zhizen. Le Poulet Diable joined the flag Dragons Blood, ruled by the pirate Afrodite. They would later merge with her crew The Argonauts.

Around the time of the merger, Lanya took a brief foray on the Sage Ocean as the pirate Reagen. There she found The Lost Lot, which would become the crew she judges all other against.

After some months sailing with TLL, Afrodite lured Lanya back to Viridian with cookies, and then to Hunter, with the promise to plank anyone who "takes a gun without asking Lan first." As First Mate of - Virtute et Armis -, Lanya handled crew matters such as officer bnav testing, and "helping" pirates to "move on" when the crew was not a good fit.

Lanya declined the rank of captain when Afrodite retired, and was relieved to see it go to Hankscorpio, as she too was growing bored and rarely ventured away from the poker tables, for anything other than flag fund raisers and blockades. She eventually faded out of the game sometime in 2008, returning from time to time when the mood strikes her.