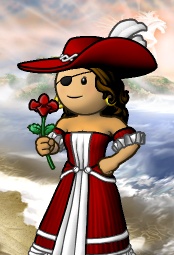 Kxz, originally from the Hunter Ocean, is a pirate on the Emerald Ocean.

Kxz first came into Puzzle Pirates some time in 2004-2005. She didn't make her pirate Kxz until November 1, 2009. Soon after her pirate was made, she joined the crew Sea's Insanity as an officer.

In early November, Kxz was running a pillage and met her closest friend Marioman. She and Marioman merged crews and made a flag of their own called The Greatest, born on December 6, 2011. The flag was a great success until early September 2012, when Marioman and Kxz decided to give up their crew and merge with Clevelandfan. Within 24 hours, Marioman left, and became fleet officer of the crew Royal Assassins Brigade, inviting Kxz to join him. In time, Kxz worked up to senior officer rank, which she stayed at for 2 months.

Kxz met Jesusluvsu about two months after joining RAB. Four months after meeting her, both of them made crews of their own, and Jesusluvsu invited Kxz to her flag, For Glory Honour and Poe, where she made Kxz princess. Kxz moved back to RAB for a couple months.

Pellaeon of Unnatural Selection took on Kxz as a senior officer. After a few months, Kxz went back to For Glory Honour and Poe by joining Jesusluvsu's crew Honour Bound.

Kxz can be found collecting seals o' piracy for her trophy page, pillaging with other crews, or making as much PoE on blockades as she can muster.