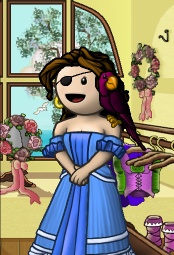 Kimyko is a pirate on the Cobalt Ocean. She is currently a senior officer in the crew Disciples of Widow Cheng and princess of the flag Cutlass and Crossbones. She can now be found on the Obsidian Ocean.

In September 2005 Kimyko washed up on the beaches of Lima Island. Right after that, she contacted her old hearty from her first account (Blackfire), Jeepgirl. Then a few days later she was invited to Furious Thieves. After that she meet Threepwood, who would become her piratey husband for the next two years.

After a while, Kimyko became senior officer in Furious Thieves. Then in late 2005 / early 2006, she left Furious Thieves, but remained hearties with the captain, Littlejo. She then moved to the crew Angel vs Devils, captained by Angy.

Seven days later on March 17th, 2006, she made her own crew, The Rush Of The Water, who her hearty, Kokomo, helped her name. Most of her friends from Furious Thieves and Devil's Angels came to her crew a couple of days later, leaving Zammy to captain Angel vs Devils. On March 31st, 2006, the flag The Roar Of The Waves, helped named by Threepwood, was made. In August 2007, She then turned to the Hunter and Sage oceans to be her home, but returned to Cobalt a month later. On December 17th 2007, Kimyko finally got her first injury, an eye patch. Also, since she started her crew, it has been renamed twice. First time it was named Crimson Roses. Then the name was changed to Dark Moon. After the crews first rename, she met Dfunction, then moved to Midnight with, but again, returned to Cobalt.

Then on February 3rd 2008, Kimyko got her second injury, a peg-leg. She was then married to Maxxi in April 2008. In the summer for 2008 she merged her crew Dark Moon with Maxxi's crew. Her flag remained though. Then in July, she decided to take some of her friends, and moved back to her own crew. Which then was merged into The Bane of Cobalt, captained by Omshateme. In the end of August, Omshateme merged his crew with Right in Two, a couple hours before that Kimyko left.

She was then crew-less for a while. She then created the crew Coffee Break, which she later left. Then on April 9th 2009, Randomdude and she together created The Oneironauts and then the flag Radiance. Throughout the summer of 2009 and into the spring of 2010, Kimyko was gone. She then left the crew, and was going to be crew-less for a while until Omshateme came back and she decided to join the crew he was in, Disciples of Widow Cheng under the flag Mixed Nuts which is captained by Soulmotion. In November of 2010 from the Harvest Celebration mystery gift, she won a wine/wine parrot named Lisianthus. She currently lives in her villa on Terra with Hatari, and is unsubscribed, undecided if she will come back regularly and play, or just check in while staying unsubscribed.

Kimyko started on the Hunter Ocean sometime in early June 2007. She followed her friend Tolliver and Driftingjean there. She no longer plays on Hunter.

Kimyko has had a pirate on Midnight ever since she started Cobalt. Her first pirate was Kimyko. Then Aquaangel was added, next Ayanami. For about three months she played Midnight with Karnov, then switched back to Cobalt. She was captain of Trippin On The Bridge, who she made with her hearty from Cobalt and Sage, Dfunction. Kimyko no longer plays on Midnight, but will check in regularly.