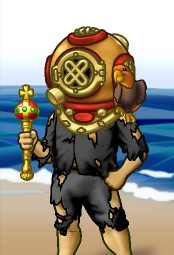 Killercon is a senior officer of the crew The Mystery Fleet and member of the flag Dust on the Hunter Ocean.

Killercon used to captain the once-famous Pride, one of the greatest crews on Hunter. The flag Dust was also a blockading flag that contested the opening of Iocane Island, and used to win most Aimuari Island event blockades.

Killercon's first crew was -Unamed- but later merged into Massacre's crew Unamed as Killercon became dormant and Unamed fell apart. On Killercon's return, Unamed merged into Lotsofgoats crew Black. Black soon fell apart as the new captain None demoted loads of people and they just left, Killercon left later on due to no unlocked ships. The Mystery Fleet was Killercons later crew who was captained by Atlantica and joined as a senior officer.

After Mystery Fleet, Killercon made Pride who became one of hunters biggest crews of 600 people. They had a good reputation for blockades since Mattinho joined the crew. It became huge and was very well known. Killercon captained a crew called Ocean Decs for a while but returned to The Mystery Fleet.