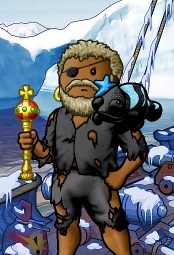 Justrandomzz is a pirate on the Emerald Ocean! He is currently monarch of the flag Black Dawn Brigade and captain of the crew Shots Fired.

Justrandomzz washed up onto the Emerald Ocean in July of 2014, he quickly joined the flag Black Dawn Brigade, under the leadership of Shaemuss. After running a few citadel runs, Justrandomzz started building his own citadel fleet. He currently has 3 ships, a junk renamed Citadel Conquerors, a war brig renamed Citadel Conquistador and a xebec renamed Citadel Conqueror. After doing citadel runs for a few weeks and using the poe from citadels to play poker with, he quickly built a fortune and started blockading. Justrandomzz participated and helped fund his first blockade at Spaniel Island, where he had a 5-0 sink count, which helped his flag Black Dawn Brigade win the blockade. With his contributions, the royals at that time voted Justrandomzz governor, and soon after that, prince of the flag. About two months later, his captain, Shaemuss decided it was time for Justrandomzz to take control of the crew. Just a week later, Shaemuss gave helm of Black Dawn Brigade to Justrandomzz, a role he has relinquished yet.

Under Justrandomzz leadership, Black Dawn Brigade quickly emerged as one of the more active flags in the ocean.

Justrandomzz claim to fame is his superb poker skills as well as his blockading habits. Although his flag (Black Dawn Brigade) doesn't have the best blockading record, many of the blockades they have taken place in have been part of mass multi-drops. In just under a year of blockading, Justrandomzz has governed numerous islands, the best islands being Scrimshaw Island, Isle of Kent, Barbary Island, Arakoua Island, Alkaid Island, and Caravanserai Island. He has also governed smaller islands such as Amity Island, Wissahickon Island, Ix Chel, Cryo Island, The Lowland Hundred, Ilha da Aguia, Manu Island, Spaniel Island, and Blackthorpe Island.