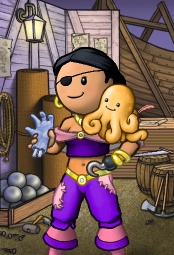 Joycey had a character whose name is now forgotten when Puzzle Pirates was back in the days when the trial period was limited. Randomly, she decided to revisit the world of Puzzle Pirates towards the end of 2006.

At the start of Joycey's pirating days, she worked hard in the navy where she was recruited by the crew Llyrs Tempest. There she made many good friends who laugh along with her.

Talmage, the prime senior officer, now captain of the crew gave Joycey, her first subscription as a gift for Christmas, knowing that she wanted it. After experiencing the joys of being a sub, Joycey has continued her sub.

In the days of the non-sub, Joycey purchased nice clothes that had a pink theme and hence earned the title of mascot of the crew, due to her pretty clothes. Joycey's clothes color used to be white and pink, but now it has become pink and grey.

After gaining more experience, Joycey has progressed through the ranks of the crew, from cabin person to pirate to officer and finally to fleet officer. She is now allowed to run her own pillages.

Hopefully, through more time on the ocean, Joycey will gain even more experience and go up in skill, stats and rank.

Joycey began on the Cobalt ocean, but when the ocean merge occurred, she became Joycey-west, and renamed herself to Joyceywoycey as she remains today.