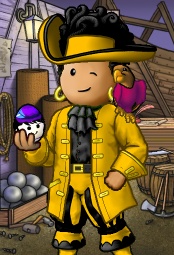 Joncole is a officer and damsel of the crew Death Wish and a member of the flag Eternal Glory on the Sage Ocean.

Joncole first washed up at an unknown time in early 2005 on the Midnight Ocean. After playing for several months as a greenie and changing accounts often, Joncole settled down and subscribed on the Cobalt Ocean. Shortly after subscribing he joined the crew Fortune Cookies, under the leadership of Synful. Soon after joining Joncole began to climb ranks, aspiring to become a royal and take a role in politics on the ocean. Eventually climbing to royalty, but soon he grew tired of the political game and played mostly to swordfight and blockade in his later Cobalt days.

Once Hunter had been released Joncole had became quite bored with Cobalt and decided to start fresh on the new doubloon server. Following his captain from Cobalt he joined the crew Flocktarts. He quickly became an established player on this ocean and eventually helped The Eye take Pukru Island in the first blockade of the ocean. Joncole continued to blockade moving in and out of The Eye up until the time Malachite opened.

Upon his arrival to Malachite he joined crews with Fixation and Striderrs. The crew soon joined the flag The Usual Suspects and become a major part of it. He helped prepare his flag for the first blockade, where they planned to be mercenaries, but no offers arose, so him and his flagmates decided to try to win the island. They succeeded in taking the island, and The Usual Suspects and Joncole continued to be major players throughout the early stages of the ocean.

After mounting frustration with the lack of players on Malachite, Joncole again decided to change oceans. This time he chose Sage as his ocean of choice, and is where he currently resides. He is former senior officer of the crew Safety Scissors and member of the flag Illium Eternae.