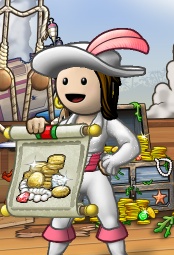 Joelle is a pirate who primarily plays on the Viridian Ocean. She sometimes visits the Ice Ocean to check out the "Bug Releases", and she also sometimes goes on Crimson to just practice her puzzles. She is the sister of Midniteslash who also plays primarily on Viridian.

Here's is all of Joelle's information on the Viridian Ocean.

Joelle started playing sometime during the year of either 2006 or 2007, she joined the crew Heroes when it used to be a part of the flag Vanguard a few weeks after she landed on the shores of Tigerleaf Mountain.

She stayed with Heroes until some of the crew's senior officers, officers, and pirates wanted to create a new crew called Elementz, and has stayed in that crew until June 22nd, 2008. Once she moved to the crew of Elementz, she later returned her shack, and relocated to Kirin Island. She then bought a cottage, bought a townhouse - so she could live in the same house as her family members, and retrieved a shack - just in case anything were to happen.

She spends most of her time just traveling around her home island of Kirin and Harmattan Island (where her townhouse is located) with her trusty dog Caramel, hunting sea monsters in Atlantis, and performing her favorite puzzle - Alchemistry.

Here is all of Sparkeestar's (a.k.a. Joelle) Crimson information.

Sparkeestar landed on the shores of Lima Island. Currently, she is a part of the crew Grid Iron Gang. She is currently practicing carpentry on this ocean to help improve her carpentry stats on Viridian.