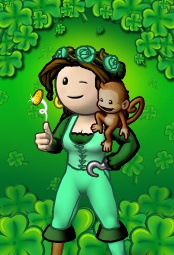 Jainasolo is currently senior officer and flirt of the crew Wyvern's Pride. She is the queen of the flag Broadsiders. She is also the owner or manager of at least one type of every shoppe on Jorvik Island and the proud owner of Sheepish Rocky.

Charmedpiper washed up on the shores of Turtle Island one cold day in February of 2004. She was quite lost and confused and wandered around, finally she entered a building. It happened to be a tailor shoppe. She loved trying on all of the clothes and went out in search of money. She quickly burned through her free trial in 3 days. She needed more. 2 more accounts were quickly created. Both were burned through just as fast.

On March 19th, 2004, she was finally able to subscribe and immediately did so. Piper quickly realized she had subscribed the wrong account, but decided to continue with the account she had subscribed. The lone pirate there was a lass by the name of Jainasolo.

The newly dubbed Jaina landed on Guava Island, where she found a woolly welcoming party waiting for her. It was love at first "bah". She used the notice board and started pillaging with every crew she could. Over the next few days she started to understand carpentry a bit better. She loved carpentry and spent most of her time playing the puzzle. One day Jaina jobbed for a crew and earned more poe than she had ever gotten before. The crew was clad in green and white; green is her favorite color. These people were funny and nice, and hadn't planked her for not knowing something. She asked to join the crew, Falcon's Fury and was allowed. Over the course of the summer of 2004, she spent a lot of time learning some of the finer points of the game. When he was able, Napalm taught her how to swordfight. She lost often, but started learning and perfecting her new skills.

Through the remainder of 2004, Jaina continued to learn about politics, shoppe keeping, and even learned how to sail. She quickly became a fierce Skelly hunter, a Senior Officer of her crew, and an alt captain of one of the more "sheepish" crews around.

In January of 2005, her Captain, Faile announced that the crew would join a new flag, Notorious Fandango. A few of Jaina's friends from Falcon's Fury decided that they would split off to form a new crew. She placed her alt within the new crew, Wyvern's Pride. Mere hours later, with only Napalm and Carrik in Wyvern's Pride, she changed her mind and left Falcon's Fury. Together with Judsin, the four began to build up the crew. They joined the flag that Falcon's Fury had left, Carpe Noctem.

In April of 2005, Jainasolo purchased her first shoppe, a tailor on Jorvik Island, from Robertdonald. The tailor, originally named The Greenwolf Memorial Tailors was quickly renamed after several complaints had been lodged about it. The tailor was renamed to Wooly Wardrobe by the Ocean Masters. Jaina had to get the name rechanged for the spelling error. This marked the beginning of her shoppe keeping. Over the next few months she convinced members of Wyvern's Pride that the crew would benefit from owning shoppes. Wyvern's Pride now owns eight shoppes on Jorvik Island.

Late in 2005, Wyvern's Pride decided that it was time to make the move to create their own flag. On November 27th, 2005, the flag Broadsiders was created. Starting on that date, and ending on January 2006, Napalm was monarch of the flag. Upon the new year, Jainasolo became the monarch of Broadsiders, of which she still holds the position of queen.

Today she likes to chat with her mates, and plot the next steps for her flag. She'd rather swordfight than pillage, but does crave playing the carpentry puzzle every now and again. She has turned her love of dressing up into a respectable rack at her Tailor, Woolly Wardrobe. Jainasolo also enjoys shipwrightery, and apothecary puzzling. She cannot stand Treasure Drop, learned to accept drinking and distilling, and wishes that she'd never learned the darn sailing puzzle. She still has a deep love for sheep, has a collection of Sheepy and Plaice ships, has her tailors, and forever has Sheepish Rocky by her side.

Jaina is known as a lover of sheep, and currently has 62 sheep. Her Sheepish Rocky can be see on the docks of Guava Island.

Jaina loves to collect trinkets and has aquired many during her time playing on Midnight.