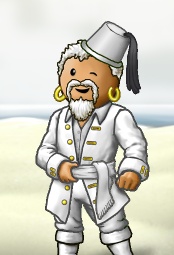 Iceane is captain of the crew Frozen Crown on the Cerulean ocean.

Iceane was shipwrecked upon Sakejima Island in the Jade Archipelago of Cobalt in November 2005, and quickly made friends on the docks. In his first two months he made his first load of PoE by buying and selling furniture, clothes and swords in his shack. His selling partner, Kittycats, was his first major friend on Cobalt, and because of her he met Manslayer, his best friend in Y!PP.

When Iceane, Kittycats, and Manslayer bought a bungalow on Sakejima Island, they later on never heard from Kittycats. They believe her pirate was deleted due to inactivity. Iceane joined Manslayer's crew called the Vengiful Maraurders which before Iceane could settle, was merged into Darkness Dragons.

After Manslayer, and another of Iceane's friends, Ocastra decided they had enough of Darkness Dragons, and make their own crew, and Iceane tagged along. The crew was named Frozen Darkness. Soon, Ocastra got dismissed from the game for sharing his mind to a greenie.