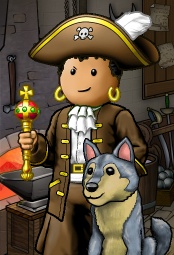 Grg is currently the captain of the crew Cactisaurus Rex in the flag Last Request on Emerald, and a senior officer in the crew Beautiful Mess on Cobalt.

Grg started his pirate carrier as a lowly jobber searching for a crew. One night he joined in on a flotilla attack with the crew Yarr Talk with their captain Cybrpyro. As soon as the vessel hit port he joined the crew as a full time member.

After spending half a year as an officer with Yarr Talk, Grg got an offer from his good mate Vyrago to join a newly formed crew The Eldritch Hoarde as a senior officer. After the hard decision to leave Yarr Talk he joined with Vyrago as a senior officer and the crew's officer trainer. Then after the decision to recreate The Eldritch Hoarde under a new name and flag. Grg became a senior officer in the crew J L C, which stands for Justice League Of Cobalt, under the flag Grabthar's Hammer. At this time Grg took a break from Cobalt and found a new home on the Ice Ocean.

Upon his return to the Cobalt Ocean he rejoined Yarr Talk as a pirate and reworked his way up past officer this time and became a fleet officer. After a long journey with the Yarrian, Grg decided to take his career to a new level on Cobalt and run his own crew. Along with his friend,Orthos, they ran the Divine Cacti Templar. After Orthos took an unexpected break from the game Grg was given the decision to move on to Absit Invidia along with Captain Crowned under the flag Acta non Verba. Here he went on to win blockades at Conglin and Carmine.

Grg has finally returned to the flag Static Before the Storm in the crew Beautiful Mess as a senior officer.

Along with residing in the Cobalt Ocean, Grg can be found alot on the Ice Ocean. In the Ice Ocean, Grg is the captain of the crew Cacti Gods and is the king of the flag Ice Evolution. Both the crew and the flag are large competitors in the ocean and are supporters of the improvement of Ice for all.

At one point in Grg's Ice history he was the governor of both Cringe Island, Winking Wall Island, and Eieio Island