For the pirate Greenwolf on the Hunter Ocean, see Greenwolf (Hunter). 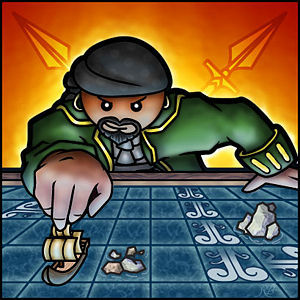 Greenwolf is a legendary pirate of both Azure and Midnight Ocean fame. He started out in the flag Bloody Seas on Azure, moving to the flag Fortune's Fools with crewmates Kellee and Caine, and then creating his own crew - Green's Wolves - and his own flag - Braindead Buccaneers. Greenwolf and his mates became well known for being fierce and successful pillagers. The flag eventually colonised the island of Jorvik towards the end of Azure. When the Midnight Ocean was announced and it became apparent that everything owned on Azure was to count for nothing on the new ocean, Greenwolf started becoming disillusioned with the game.

At this point, Greenwolf took his crew out of the Looterati and formed the flag Tyr's Own with old mates from Azure. This was with the specific goal to blockade Jorvik when it became open, in opposition to the Looterati. Tyr's Own allied with the the polar opposite of Looterati, the large flags of Imperio and Crimson Tide. When Jorvik opened up for blockading, the ocean expected a massive battle to take place, but Tyr's Own did not contend for the island, and therefore it was won easily by the Looterati. When Greenwolf and the flag of Tyr's Own did eventually go after Jorvik, they could not muster the support necessary to fight against the Looterati and the RAWR alliance, and therefore Greenwolf failed to take Jorvik, the island he saw as rightfully his. Not to be deterred, Tyr's Own placed another bid for Jorvik with the blockade of Jorvik III. However, the Looterati once again successfully defended the island against hostilities. Eventually, Greenwolf left the game, probably partially in response to Tyr's Own failure to win back Jorvik in 2004, and his new interest in World of Warcraft.

He was a very well known player; articulate on the forums and fiercely loyal to those he counted as his in-game friends. There are many who are glad about his retirement, but just as many who miss him dearly. He was truly one of the personalities of the game.