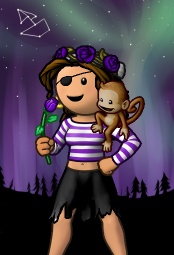 Fleurs washed ashore after swirling the ocean of Midnight in early 2009. Shortly, after joined the crew Mystery Inc and raised the ranks. In the early months of 2010 she was made a princess in the crew's flag, Mystery Core. After a few years of playing on and off it was time for the pirate to take a break.

During easter 2013, Fleurs rejoined the game ready to spread flower power throughout the Cerulean Ocean. She quickly joined the flag For Glory or Honour after being invited by a old hearty from Mystery Inc.