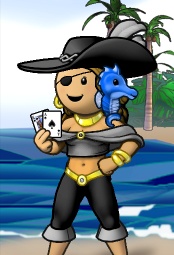 Wendyrz is a senior officer of the crew El Cielo Azul and the princess of the flag Castigo X.

Much of Wendyrz's politicking tactics include someone offering up a part of Wendy's body or her undergarments with or without Wendy's knowledge. Many of the arguments withing No Parking stem from who gets ownership of Wendy and/or how soon she can provide a picture of herself so the rest of the crew can get to know her.

Wendyrz likes to do spades, spades, and more spades. Having achieved a sublime in spades, she constantly talks people into playing a game or two and can never be seen far from the spades tables, especially on drunken Tuesdays. If she is not doing spades, then she is most likely blockading.