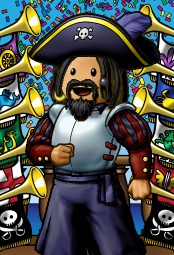 Feix runs pillages, leads expedition to imperial outposts, and captains a midsize crew. He is an avid explorer and navigator.

Feix's earliest notable seafaring adventures were with the piratey crew of Lion's Pride on the Viridian Ocean. And various things he did, including going to Sea Monster lairs, sailing with the navy, gem and fruit runnings, and founding the crew Quohog. More recently he was seen prying the corners of oceans and trading in rare charts.