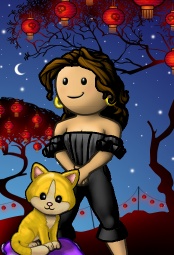 Eclipso started playing January of 2009 on the Midnight Ocean. She was apart of the crew Et Pur Se And until she left when the merge occured. She then became senior officer in The Jazzie Crew and lady of the flag For Glory or Honour alongside her best friend Joedown.

She became inactive for 2 years and when returning she left the crew and joined the crew, Hogwarts, which she is now captain of, and joined and became lady of Pixelated Warfare in January 2014.

She also jumps between the Cerulean Ocean and the Emerald Ocean as she likes to spread the love on both oceans and not be loyal to one ocean. On the Emerald Ocean, Eclipso is officer in the crew Like Clockwork and member of the flag Pandorica.

Eclipso is mostly known by Clippy or Clips and loves to collect pets.