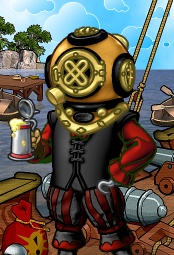 Drekes is a senior officer of the crew X-Men, and King of the flag Slooper Heroes on the Cobalt Ocean.

Drekes washed up on the shores of Kirin Island in February 2006. He began his piratey career as a cabin person in the crew The Pillage People but has since left to join another crew and create his own flag. Drekes is currently living in a friends Estate on Kirin Island. In his spare time he often goes on greeter duty. Drekes often gloats on how his portrait's head is on the portrait clothing article. Drekes acquired a tan monkey, named "Jaed", on January 7, 2008