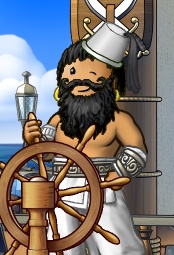 Dmitry is a pirate on the Midnight ocean. He is currently Captain of Nos Sto Laurifer, and Lord of Elysian Fields.

Dmitry came to the shores Midnight around September of 2005.

He joined up with The Vampiric Overlords, and grew in ranks. After learning the ropes of officership, and the game, Dmitry decided to start his own crew, Vampiric Knights. Joining the flag The Vampiric Council, Dmitry quickly earned the trust of the flag, and became prince.

On January 2nd, 2006 Vampiric Knights joined Elysian Fields. After earning the trust of the royalty, Dmitry became prince in February of the same year. He was also put in charge of Elysian Fields' events, forming the first Events Committee of the flag, and holding the title of Minister of Events.

Dmitry became involved in flag matters, and the Vampiric Knights started to become dormant. He then merged his crew with Dark Water.

Then, after the summer of 2006, Dmitry was forced to go into retirement from the game. He however returned in June of 2007. Once more, he resumed his royal duties.

Once more, in mid-December of 2007, Dmitry was unable to continue his royal duties, so he put down his crown and scepter. Dmitry resumed playing in spring of 2009, creating the crew Nos Sto Laurifer, which proudly flies the flag of Elysian Fields.