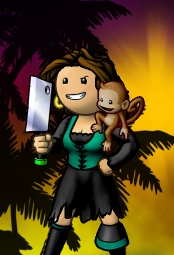 Cyprin, or Cyp, as she's known by all flag and crew members, joined Puzzle Pirates summer of 2005, as the result of finding a link to Puzzle Pirates online. She ended up shipwrecked on Viridian, and was forced to perform Sailing and Carpentry to feed her boredom like many greenies at that time. A few days later after quickly capturing four broads in Sailing, Gunnery, Carpentry and Bilging (which she still hates to this day), she was quickly told to join a crew with Evab under the captain of Myrella in the flag of RiddleMakers. Children of the Dawn was a crew full of bloodthirsty pirates including Dehitay, Prettylady (now Leilanisohma), Ducksrule, Moonlit, Bonnero, Cathary, Keafer, Dafoo, Melania, and Pepita. She later quickly gained three solids in Sailing, Carpentry, and Gunnery before Evab started to consider recommending her to become officer in CotD. Shortly after becoming officer and buying her first sloop, she disappeared that following December for unknown reasons, and the pirate was deleted.

Cyprin returned to Viridian in late January 2006 and was quickly made officer again in CotD before leaving for a new crew, Blood Raven with Evab due to personal conflicts made in CotD. While being in Blood Raven, Cyprin was made fleet officer as soon as she amazingly acquired three broads in Bilging, Carpentry, and Gunnery; and one solid in Sailing. Cyprin proved loyal to Blood Raven but left countless times due to personal conflicts with Moonlit, and this eventually leaded to Blood Raven's downfall with conflicts in the crew. From there, she decided to move to a different flag as the people in RiddleMakers disliked her. Post Mortem was her new flag for the next few months under Blitey's crew, Die By The Sword. She quickly made senior officer and stayed until she became best friends with Sjieg, which eventually convinced her to join the Unbreakable Metal Fleet under the flag The Force.

While her stay there in late 2006, she quickly made her own fleet, owning fifteen sloops, twenty-one war brigs, and two grand frigates. She made her first paragon in Sailing before considering leaving The Force for her own crew. Cyprin met Zuqual before she bought the doubloons for her own captain badge and decided to remain senior officer in UMF for awhile as she got to know Zuqual before marrying him. Zuqual and Cyprin were married by Lombar, Zuqual's brother in the Lima Palace on February 2007. She then got too stressed with schoolwork and decided to quit for a short term as she was very addicted to Puzzle Pirates.

She returned that year in July, where she found out that Zuqual and Lombar, her two best friends on the game quit as well, but this didn't bring her down as she decided to create her own crew as she had enough ships. She rejoined Post Mortem with her crew, Drunken Pirates. She then was made princess of Post Mortem. Aceupsleeve, Daggisback, Schramdawg, Schomanisred, and Kingofmoo were her senior officers which she convinced to come join from UMF. The crew Drunken Pirates reached top 10 in crew fame before Schramdawg decided to leave. Thus, creating many personal conflicts with the rest of her senior officers, who ended up leaving and quitting.

Drunken Pirates was a failure and Cyprin disbanded it before returning to RiddleMakers with Simbah in Dragon's Horde as officer before selling her entire fleet and everything she owned to various people and then she gave up and quit for a very long time.

Cyprin returned to Puzzle Pirates later in January of 2008 and joined up with Tau Kappa Epsilon with Beow shortly after he created it, and together along with Boochie, Laurabelle, Maribo and Rhenne. Later in that month, they changed the name of TKE to Disturbia. Soon after, they reached number 32, but after some mix up, Beow made Priscillia the captain of Disturbia and left. Cyprin stayed in honour to Beow, but Disturbia became moot in early Feburary. In late Feburary, Beow returned and tried again with a new crew, Rise Against with returning SO's such as Baldis, Capnhooked along with first mate Cyprin, Laurabelle and Maribo and this crew stayed strong until 100 members and top 10 in crew rank in under two weeks. They joined up with Riddlemakers then, and stayed there.

In mid-April of 08, due to some family troubles, Beow had to leave Puzzle Pirates and so Rise Against quickly was surpressed and then it eventually died out, and Cyprin decided to re-join Cutthroatale in Ducha De Oro, and Rise Against was no more.

Cyprin stayed in Ducha De Oro until December 2010 with alternating captains Cutthroatale, Flar and finally Icey. She left to join with Cherylshubby in Losers Need Not Apply under the flag Laugh Ourselves To Death.

This crew did not last long before Cherylshubby decided to quit Puzzle Pirates, thus forcing Cyprin to join another crew. As she spent six years moving crews, she decided to go back to her old crew, one of the first ever on the Viridian Ocean: Die By The Sword, under the same old flag, Post Mortem.

She is currently Fleet Officer under the captain, Staycr, and she has no plans to leave for any other crew or flag.

In May 2011, she finally achieved her lifelong goal on Puzzle Pirates: get a monkey familiar. She has named her tan monkey, Dax, after her best friend.

In November 2012, she received her tan octopus from a friend who was quitting, Xao.

She was also trying to memorize the (Virdian) now Meridian Ocean.

Formerly fleet officer of Die By The Sword.