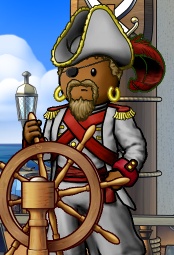 Cupiditas is an independent pirate on the Hunter Ocean.

Cupiditas first started to play Puzzle Pirates in 2006, and quickly joined the crew Frozen. After losing interest in the game he quit three weeks later.

After two years, Cupiditas came back and joined the crew Hidden Force. As Fenny helped him learn the basics, he was befriending several members of the crew including Zeoforce, Flirtalert, Monta, and Privateryno. Cupiditas climbed through the ranks and was promoted to senior officer. Two weeks after his promotion theft broke out in the crew. Cupiditas then recommended to Zeoforce that the higher ranking officers flee to Fenny's crew, For the Fallen. This crew fell apart after two weeks, so Zeoforce made the crew Inner Strength. Cupiditas joined Zeoforce's crew, and shortly after quit the game. In March of 2009, with all his stats gone, Cupiditas returned and had to start anew. Since then, he has managed to get ultimate bilging and hasn't bothered with the other puzzles.

In August of 2009, he was banned for reasons that he wishes not to discuss.