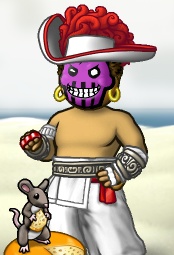 Criis is a player on the Meridian Ocean. He is an officer of the crew Stripped and member of the flag Barely Dressed.

Criis the pirate was created in early 2012, after one of his previous pirates was deleted due to inactivity. On the first day of creation, on a blockade he ran into a good friend from his old pirates crew; Hugorune, he then joined Hugorune's crew Blood On The Sheets as a fleet officer.

Criis stayed in the crew until December 2012, where after an incident, he decided to leave. He then joined the crew Stripped on February 14, 2013, and enjoys a healthy pirate lifestyle of sea-monster hunting and annoying Hugorune.

Criis hasn't owned many ships; in fact he only keeps one that his friend helped him acquire, a Rogue class dhow named the Merciless Bream.