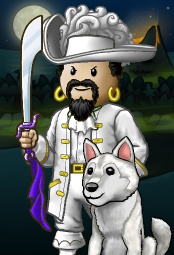 Crazydingo is senior officer and Flirt of the crew Nemesis Program on the Sage Ocean.

In February, 2010 an old pirate returned... Coming back as Crazydingo. On entering the YPP world he joined a friend (from another game) in his crew as Senior Officer, then leaving that crew he made his own crew, the Bloodthirsty Wanderers. A month later he merged with The Bloodwake Culling run by Zelshanqio. While in the Bloodwake Culling he made some close friends. As it happened he was in the Black Flag. After arguments with the king of the flag, the Bloodwake Culling crew decided to depart After a while the crew started to die out and he (Crazydingo) joined Glorious And Victorious in the Magnata Established Flag. He joined them as a Fleet officer, and after a few weeks after demonstrating the trust put in him, he became a Senior Officer.

After a few months he left the M.E. Flag and joined other friends in their crew. Eventually though he decided to make a permanent choice and joined the Cyanide and Happiness crew and the Flag called Halo Effect run by Kimi who is now a good friend of his. After a while he followed Kimi to the flag Burning Desire. There, they met Extinction and Ritsy. A while after meeting them they (Kimi and Ritsy) decided to merge crews and become one, taking on Ritsy's crew's name, Nemesis Program. After that, they joined the flag, Say No More.

At the Moment, I am now within the crew Wanted Under the leadership of Lawyerbabe. CrazyDingo is now found in the poker tables, in spades or on the dock of Admiral with friends.