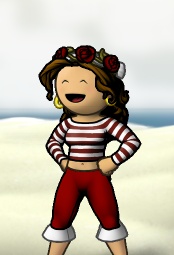 Corsage was a pirate on the Midnight Ocean. She had numerous (secret) pirates in the past but decided to stay on Midnight where she would begin her quest for greatness. This pirate has been deleted.

Her best friend was Kayh whom she would love forever. He was her best friend and for the final time he was not her boyfriend there, just best hearties as they had so much in common. He was sweet, sensitive and the best mate a pirate could ever have. Corsage really wanted to gain all 3 injuries and loved blockades. She hoped to gain a familiar, maybe a maroon or blue or white one, and lots more friends.

She was an independent pirate and planned to stay that way, no crew and no flag to tie her down. The only commitments she had to live with were the ones of her hearties and the Ocean Masters.