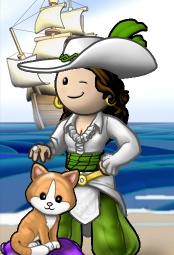 Cathary is a senior officer and urchin of the crew Outtamyway. She has been playing since August 2005 and frequently bothers the Viridian Ocean. She'll admit that Sailing is her best puzzle, but she won't admit that she's actually quite good at it.

Cathary has always valued friends over puzzles and politics, which is the reason she has stayed loyal to her hearties and crews. Whilst speaking to a friend about leaving Sea Change for another flag, she said that she didn't really care what happens just as long as she's among friends.

However, Cathary still tries hard to boost her pirating skills and hopes one day to get Ultimate sails (she isn't hoping THAT hard though...). She would hate to be a captain because she doesn't think she'd be able to cope with the stress!

Although Cathary is of senior officer rank, she admits that she has completely forgotten everything her old captain taught her about Battle Navigation. She is trying to regain the knowledge she has lost by watching her friends battle brigands and barbarians but she finds it extremely difficult.