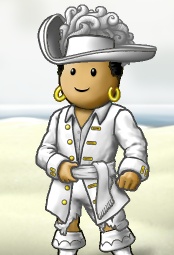 Buchin was captain of the crew Radiance and lord of the flag The Resolution.

Buchin was a senior officer of Purvy Scurvy, a small crew led by Sovereignty. He left Purvy Scurvy to create his own crew called Radiance.

He one day hopes to create his own flag, but for the moment he has joined PerfectlyEvilRedVexers, the flag of his good friend and former captain Sovereignty. His crew is composed of his friends and family, some of them using alts because they are also committed to their own crews. Alexpeng and Andromachee/Andreaalyce are examples of this.

The original pirate of Buchin has been deleted because of a long spell of inactivity, but has been recreated with the same name by the same person for the moment.