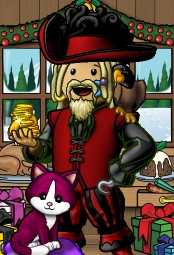 Bubbleboy is a senior officer of Confused and Abused on the Meridian Ocean. He has the name Bubbleboy on all doubloon oceans, but not on the subscriber oceans.

Bubbleboy started off in the crew Black Eyed Hawks, run by Hawkins and Granny, who have been gone for a long time. There he worked his way up, until he was an officer. He was one of the lucky pirates who started the game before poker came along. When Hawkins and Granny left the game, the Black Eyed Hawks slowly broke down. He then left to go to a number of different crews, and then settled to a crew with Thorn and his crew, The Crown of Thorn.

Eventually after getting confident in the game, he started his own crew called The White Sharks, Where he stayed for a few months, until he decided to move on, and running a crew wasn't for him. After over 2 years of play, even though his stats remain poor, he has made many good friends. Unfortunately many of them have quit Puzzle Pirates over time.