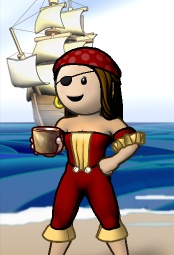 Brendoo is currently a senior officer and taskmaster of the crew No More Excuses on the Emerald Ocean and queen of the flag Skulls. She is married in real life to Slouch, captain of No More Excuses.

Brendoo landed on Puzzle Pirates in January 2012. She was quickly promoted to senior officer of The Rise of Orion under the captainship of Straft. Eventually she became princess of the flag Embarkation, providing counsel to King Aleexx, captain of the crew Indeed.

As Thee Rise of Orion was slowly sinking into inactivity, Brendoo struck out on her own to form the crew Sails Away. This was a short-lived endeavor, and Sails Away merged into the crew Indeed. Brendoo was once again a senior officer and pillaging with all her friends.

In the fall of 2012, many of the crew were dissatisfied in being in a semi-inactive crew and a "mutiny" occurred, led by the daring Jeffrry.

The mutineers, including Brendoo, formed the crew No More Excuses (NME), and shortly thereafter the flag Border Patrol. Brendoo alternated between being a titled member and monarch, along with Jeffrry and Demodez. The remnants of the crew Indeed merged into NME within days, and all were happy once again.

Brendoo’s favorite memory of 2012 was when Border Patrol won Kiwara LVI from Bacon Strips who had anticipated a flagsit. As the year ended, Border Patrol changed their name to Skulls to showcase their more evil intents.

Sadly, war came in early January 2013 with Kiwara LVIII. Despite having planned to let Kiwara go, Skulls took offence to Hooked's blockade approach and managed a valiant but unsuccessful attempt to defend. A 2-week war followed, with many PvP wins for Skulls.

In the Spring of 2013, wanting to learn how larger flags operate, NME left Skulls and joined the flag My John Thomas. Most of the crew was unhappy under this flagship and voted to return to Skulls within a month.

Most recently, Brendoo helped lead Skulls in Wissahickon L. Although unable to take the island, much was learned and Brendoo is looking forward running future cades.