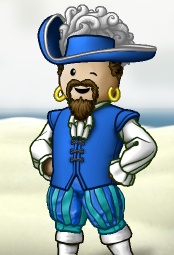 Brassbeard is a pirate on the Ice and Midnight Oceans. On Ice he is an independent pirate, while on Midnight he is the captain of the crew Raging Attitudes In Debt.

Brassbeard got his start in the crew Imperial Golden Dragons of The Black Finger. Learning the ways of the sea under Matrat, he purchased a sloop to move commodities for his apothecary stall on Alpha Island. After altercations that caused the temporary dissolution of his crew and flag, Brassbeard and his friends formed Raging Attitudes in Debt. He was placed in the captain's seat, as he was the most well versed pirate of the group.

These days, he spends his diminished free time wandering the ocean and forums, sometimes with his first mate Blackjewell. He's always up for a few hands of poker, and would most commonly be seen at skellie fights, trying desperately to make it into a fray.