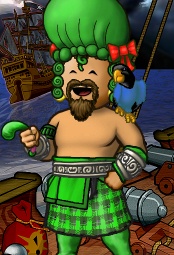 Blinkkidmutt is a senior officer in Angels Forbid.

Blinkkidmutt was thrown upon the shores of Spring Island on the Midnight Ocean. He stayed for a few days in Half Circle From Hell before joining Mare Dominatio. He stayed with Mare Dominatio for about three months. He left that crew to join the Emerald Valkyires. After staying with them for about a month he left to join some of his old friends in Undine’s Revenge. It was around this time that the Biapet Tourneys started and Blink started to play on the other oceans, most notably Cobalt.

Shortly after this, he started playing on the Ice Ocean and accumulated 6 fancy ribbon trinkets within the first 24 hours of him playing there. After three weeks of vacation, Blink came back to join Zane’s Marauders as a senior officer. On August 23, 2006 he won a black and blue parrot in the Midnight Barfight. On December 25, 2006 he lost a rematch to Stevensam (under the alias Allos) for his parrot. On December 27, 2006 he won a red and maroon parrot in the Cobalt December Doodles Drinking Tournament under the alias Cactusjack, which he traded to Stevensam for his black and blue parrot on Midnight. On April 15, 2007 he won a tan and yellow parrot on sage in an automated rumble tournament.