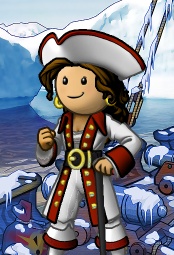 Bettybootey is a pirate on the Sage Ocean. She is an officer and muse of the crew Poseidon's Tricorne and member of the flag League of Light.

Betty first entered the Sage Ocean in early August 2006. As a total greenie she jobbed for the navy for weeks trying to raise PoE for some new clothing. She then noticed that crews were offering jobs aboard their vessels and paid fine wages to those who did a good job. Betty started to job for many different crews in hope to find a good crew to settle down with. She soon got a job with the crew Fair Winds. She fell in love with the crew there and then and asked to join them.

After loads of hard work as a sailor she received the title of sailmaster but she soon got the taste for Carpentry and that remains her passion. After some months as a pirate she was ready to be promoted to officer and then later in December 2006 she got a new promotion making her fleet officer.

In May 2007 Betty got her final promotion as senior officer.

After staying with Fair Winds for a long time Betty left the crew and followed her first hearty and best mate Kinglouie in the crew Poseidon's Tricorne where she is now Senior officer. There she grew to be ultimate distiller and Kinglouie gave her her own distilling stall so she could make the best rum on Sage. Later he gave her Good Swill Hunting on Admiral and Betty then closed her distill stall to focus on the shop.

Betty resides on Admiral with Kinglouie