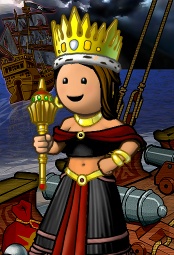 Beachie came to Viridian with Camelrider (Captain of The Morning Star). She first joined a crew called Honour, where she was greeted by Moonlit, Dribbleman, and Redriver. Several months later, she left this crew to join The Morning Star, where she rose to the rank of Senior officer and learned much about the game from Camelrider, Breezie, Firefly.

After several months, she left to start her own journey as Captain of The Charmed Voyagers. After a time in the flag Paradise, she took her crew to RiddleMakers, where she was titled.