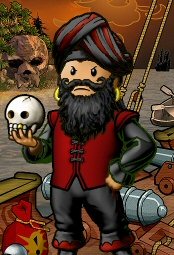 Barbarous is a pirate on the Viridian Ocean.

Barbarous arrived on the Viridian Ocean on June 13, 2005, and was recruited into the newly created crew the Dogs of War by Lansky. He proved his worth, and quickly rose through the ranks becoming the first non-founding officer. On June 26, 2005 he took part in the planning and founding of the flag Cry Havoc. He has acted as executive officer in Cry Havoc's 3 blockades, and aided the many allies of the flag in their blockades.

He is dedicated to his crew and flag, turning down offers of ships, officer ranking, royalty, and captaincy of 3 different crews to remain with his mates. He is not only the taskmaster of the Dogs of War, but is also known as the bodyguard to many of the lady pirates of the flag and secretary to his monarch Lansky.

Known for his dedicated work, fanatical loyalty, stubborness, gruff personality, high speed planking, and one of the largest collections of turbans on the ocean, he is a constant fixture in his flag and crew.