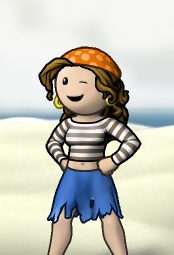 Amazinad is a pirate on the Emerald Ocean. Prior to the ocean merge on January 31st, 2012, she played on the Hunter Ocean. On all other oceans, she is known as Adrielle.

Amazinad has been a pirate on the Hunter Ocean since the ocean's release. Amazinad would have preferred to have the name Adrielle, as her characters on all other oceans had this name. However, unfortunately, someone else took the name before she could get it. It is for this reason that Adrielle was rather pleased when the Hunter and Sage Oceans merged to form Emerald Ocean.

Amazinad was a drifter on the Hunter Ocean, and had never been in a crew. She played on Hunter only occasionally, especially if there were special events running on the ocean. It is likely that Amazinad will become more active on the new Emerald Ocean.

Amazinad has a grey pet rat, named Olivia, and lives on Chachapoya Island.