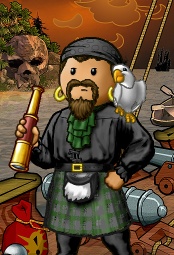 Captain of Enforcers of Denyle

Nearly 3 years ago, Agham washed onto the shores of Park Island on the Midnight Ocean. Shortly after, he joined the Pillaging Raiders under the leadership of Philfine, known now as Kbhunter, and escalated until he reached rank of senior officer. At the time Phil had handed leadership of the crew to Debz, and Agham was made into 1st mate.

Agham made quite a list of hearties during that time, Midnight is such a tight ocean. A few months later, he decided it was time to face the ocean his own way. Bidding his fellow crewmates goodbye, he headed out and started his first crew: Black Blood, renamed to Black Blooded Adamants later, based on Park Island. And he rejoined his flag this time as a renowned captain.

Alas, that fantasy called real life had gotten a grip on his focus, and he had to quit the pirate life for nearly six months, during which, his first mate, Whitedovecam was in charge of the crew.

When Agham was finally able to get back to the pirate lifestyle, his crew was still there, although it had switched flags and was now part of Caper's Capers. It was only fair that he gave leadership of the crew to Whitedovecam, as she had recruited more mates and has been known to everybody as the leader while he was away. So, Black Blooded Adamants was renamed to Sunset Calls of Caper's Capers, and Whitedovecam was made official captain.

As Agham now needed a fresh start, he created a brand new crew and entitled it Enforcers of Denyle and chose Turtle Island as his home isle.