This article is about the trade interface. For the voyage configuration, see Configure voyage#Trade. For the command, see trade (command).

A trade allows two pirates within the same scene to exchange inventory items and PoE with other pirates. On Doubloon Oceans, pirates may also exchange doubloons. Some items such as unwrapped badges, as well as exclusive box edition items (savvy hat and backsword) are untradeable.

Two pirates negotiating a trade will both display an outstretched hand

as their activity icon.

To initiate a trade request, click on a pirate and select the Trade with icon. It looks like this: 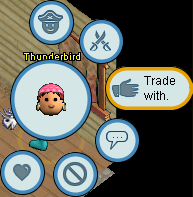 If the other pirate has their Do not disturb enabled, it is not possible to initiate a trade request (unless they are a hearty): 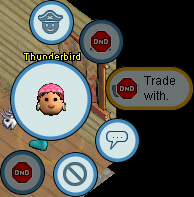 The pirate receiving the trade request will receive a notice on their ahoy panel, and can choose whether to negotiate or reject the request. Should they accept, this interface will appear (doubloon line appears on Doubloon oceans only): 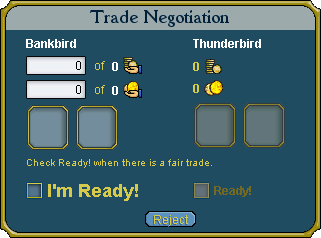 To trade Pieces of Eight, enter a number in the top line. To trade doubloons, enter a number in the second line. If the number is higher than the quantity of the respective currency the pirate has in their inventory, it will change to the amount that the pirate has. To trade items, access the booty panel, and drag the items into the trade window. Pirates can trade more than two items at once, and a scrollbar will appear if needed. Items that are untradeable cannot be placed into the item boxes, nor can items being worn or wielded.

If the trade terms are deemed acceptable, click the Ready checkbox. When this box is checked on a pirate's side, that pirate cannot alter anything in the boxes on their side. If one pirate has checked the box and the other pirate changes their offer, it will automatically uncheck both sides (to avoid pirates scamming each other with last minute changes). The checkbox cannot be checked for about three seconds after the other pirate has made a change.

When both sides have clicked the Ready checkbox, the trade goes through. If either side clicks the Reject button, the trade aborts.